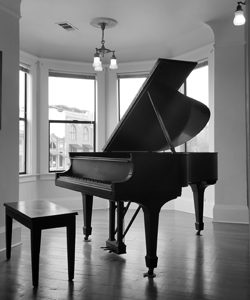 Corey does not take for granted that the instrument he owns and enjoys has a known history. Searching Craigslist ads for a piano in 2014, he saw an ad for a Steinway piano listed as part of an estate sale – no picture or other details were given. With his interest piqued, he called and made an appointment to see it. Arriving at the house, he saw the piano sitting against a wall, piles of books and boxes on top of its cover. After unearthing and uncovering the instrument, he realized it was likely something of value and made the decision right then to purchase it.

Remembering what he could about contract law, he struck a deal, wrote up two copies of a contract, and left a deposit, telling the owner he would forfeit the deposit if he did not return with the rest of the amount within 2 weeks. Corey returned home and began selling off anything he had of value, borrowed some money from his girlfriend, and was able to gather the full amount plus moving costs within the 2 weeks. 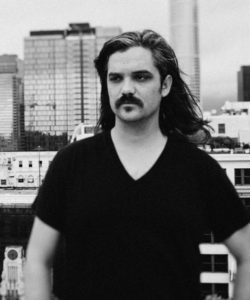 Getting the piano into his second story 1910 apartment was a feat which required some disassembling, a crane, and a lot of manpower. The piano now sits in a bay-windowed room above a downtown corner of Paso Robles. Corey plays the piano on a daily basis when he is at home and it has become the centerpiece of small concerts that he holds in his apartment.

The 1914 Steinway O model piano is the largest of Steinway’s “small grands” and is called a Living Room Grand. It was built in New York, and belonged to Alred Ariola, a member of The San Francisco Symphony in the 1920s and to the NBC Orchestra in the 1930s. It eventually came to be owned by Alfred Ariola and it was from Ariola’s grandson that Corey purchased it as part of a sale to save the family’s property from tax liens.

Ariola had been the conductor of the Golden Gate Park Band in the 1930s as well as a member of the San Francisco Symphony as a trumpet player. He also taught private lessons, passing his love of music along to his students. He must have spent many hours playing the Steinway – the scratch marks above the keys are testament to that. Its years of sitting silent were ended with Corey’s chance discovery and it gives back now with all it has.